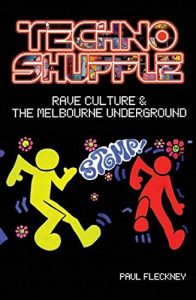 New York 1978, London 1988, Melbourne 1998. Twenty years on from the disco revolution and a decade after acid house, Melbourne's warehouse party scene was at its peak.

Every weekend in 'Techno City', thousands of ravers expressed their freedom through music, ecstasy and dancing the Melbourne shuffle. And yet for the majority of Melburnians during this time, their only contact with this secret subculture was the occasional scare story in the media or an early morning encounter with a brightly dressed raver trying to find her way home. This book hopes to change that.

Informed by the author's interviews with over 40 DJs, promoters, artists and partygoers, including many voices that have never before been heard, Techno Shuffle traces rave's evolution from tiny underground clubs to vast waterfront wonderlands sparkling with creativity. We meet the personalities and places that shaped a subculture and we learn how bitter rivalries, the internet and a city on the move ultimately tore the scene apart.

Techno Shuffle unfolds against a backdrop of post-war migration, gay and lesbian rights, the AIDS crisis, Australian drinking culture, the Melbourne gangland killings and the global ascendancy of dance music. During these anxious times in our post-truth age, '90s rave teaches us the value of freedom, community and respect. Let the party begin.