You are here: Home / Dance / Remembering shuffling, the dance craze of the Bebo era

For a time in the late 2000s, youth of all backgrounds in this country began to dance. Don Rowe remembers the brief flash when techno became a unifying force in New Zealand.

Since the beginning of time humanity has yearned to dance.

From the cha cha to the charleston, trap arms to the twerk, dance has charmed the masses, titilated the aristocracy and sent religious fanatics into fervent ecstasy since time immemorial. At its most powerful, dance is unrivalled in its capacity to express the unspeakable heights of universal human emotion. This is the story of one such dance.

Around 2009, in the final days of Bebo, Kiwis began to shuffle. A modern take on the running man, upscaled for a time where music was made by computer, shuffling was the end result of LimeWire, ubiquitous mp3 players and a worrying tolerance for European EDM in mainstream society. It spread like a virus, from Pukekohe to Paraparaumu, Hawkes’ Bay to Hamilton.

But where did it come from? I tracked down the biggest skux I know to find out.

Auckland nightlife photographer Sean Petersen, of H-Town Street Cats fame. says he believes that shuffling has its roots in Australia.

“I made shuffling videos and joined a pisstake shuffling crew [KoK] 9 years ago,” he said. “I was inspired by the Melbourne shuffle. I think that is where it originated from.”

New Zealand shuffling by comparison is raw and aggressive; the rap battle to the Australian choral recital. In the absence of hard drugs, New Zealanders in high schools across the country developed hard style.

Shuffle battles were the closest New Zealand ever got to the knife fight from Michael Jackson’s Beat It. Outside libraries, at bus depots, in the carpark of your local McDonald’s, shuffle crews slid about to phone-speaker techno, dropping the latest YouTube Mashups.

Anthems like Now You’re Gone, Everytime We Touch, and whatever the fuck the Holly Dolly song was, dominated public spaces the nation over with their tinny-ass jumpstyle beats.

But these gangs weren’t patched, or in fashionable leathers, instead wearing tight jeans, with anime haircuts and soft cotton shoes. Beanies were worn high on the head like the tip of a condom. It was all pretty skux deluxe.

Real ones will recognise these: 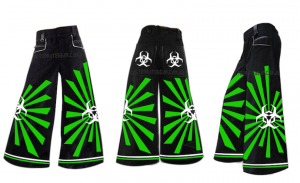 Shuffle crews had their own brand aesthetic: neon writing, military fonts, the sort of decals you’d put on your Skyline in the first Need for Speed: Underground. They were Straight Outta Compton meets Blade Runner, a street-flavoured take on what techno goths have been trying to do for years. This distinction was not made across racial or class lines however: Rory English, son of Sir Bill, is a known shuffler. The shuffle movement may have been the last time white men danced with confidence in this country.

Stomping and sliding and slithering about, shuffling was to be as a speed-addled snake, high on ice in a nightclub made of the same.

But like an afternoon in town battling with the boys, bed time came swiftly for the shuffle scene in New Zealand. It was time to catch the bus into cultural irrelevancy and shuffling went the way of Big Foot, Tamagotchi, and a world that seemed bright; these days existing only in the rosy memory of your past.

Thank God it all died off before Instagram was a thing.